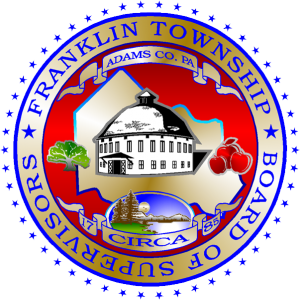 Franklin Township was formed on the last Tuesday of October 1785 during the quarterly session of the York County Court. It was taken from what was then Cumberland Township, York County. This newly formed township was named after Benjamin Franklin and was comprised of mostly woodlands with small parcels of farmland.

Franklin Township had several limestone mines within its boundaries in the 1700’s and 1800’s. These mines were located between Cashtown and Hilltown, and another between Arendtsville and Mummasburg. Franklin Township also had numerous iron ore mines. Two of these sites were on the George Cole farm in Buchanan Valley, and another could be found on the Peter Comfort farm, located along the Big Marsh Creek, one mile east of Cashtown. This mine was considered one of the most important mines in Adams County at the time.

The first known inhabitants of Franklin Township were bands of the Delaware, Susquehannock and Shawnee Indian tribes. The first white settlers of the township date back to the early 1700’s. The first known settler was James Bleakley, a farmer and shoemaker who moved into Pleasant Valley in 1734. Bleakly died in 1821 at the age of 98. During the presidential campaign of 1856, Pleasant Valley was renamed Buchanan Valley to honor the United States President, James Buchanan. The name remains today and is the area at the top of Mount Newman, traveling north along state route 234.

Perhaps the most well known piece of Franklin Township history is the story of Mary Jemison, who in 1755 was captured in Pleasant Valley by a band of six Shawnee Indians who were disturbed by the encroachment of the white settlers on their land. A total of eight people, including Mary’s father, mother, brothers and sisters were killed by that same band of Indians. Mary became known as the “White Squaw” as she came to live with her Indian captives.

On March 25, 1786, the following persons became the first elected officials of Franklin Township:

The village of Cashtown was laid out in the early 1800’s. The earliest known reference to Cashtown was made in 1821, when it was said that a tavern keeper at what is now the Cashtown Inn, demanded cash payment from a patron. The first postmaster of Cashtown was Adam S. E. Duncan, who was appointed in 1835.

Cashtown is also rumored to have been the site of the first blood shed in Adams County prior to the actual start of the Battle of Gettysburg. On June 26, 1863 at 10:00 a.m., four local residents, Henry Hahn, Henry Shultz, David Powell and Uriah Powell, were upset about the advance of General Early’s Confederate Troops under the command of Colonel Elijah White, moving through Cashtown. The four men decided to ambush the advancing column of approaching soldiers. The actual site of the ambush is believed to be near an old Limekiln surrounded by a dense area of rocks and laurel, just west of Cashtown near what is now Old Route 30. As the troops passed a certain point in the road, Hahn, the only man armed, fired a heavy load of buckshot at the column of Confederates. One of the Confederate soldiers reeled and fell from his mount. The soldier died later that evening. Hahn and the other men fled into the area known as “Gallagher’s Knob”, near the foot of Green Ridge where they remained for ten days.

It has been said that General Lee wanted to fight a defensive battle, and had intended it to be around the Cashtown area because of it’s rough terrain and strategic location. However, because of a premature action of General Hill, Cashtown, by the irony of fate, missed historical fame as a great battlefield.

Franklin Township has many churches within its borders. One of the earliest recorded churches is the St. Ignatius Catholic Church, which was established in 1816 on land owned by John Lowstetter, located in Buchanan Valley. The Reformed and Lutheran Union Church, known today as Flohrs Church, between Cashtown and McKnightstown, dates back to 1822.

On January 22, 1800, by an Act of Legislature, Adams County became its own entity from a part of York County. York and Adams Counties were originally a part of Lancaster County. Adams County consists of 531 square miles, in an area of 24 x 27 miles, totaling 339,133 acres.

Prior to 1897, there was no uniformity among townships. Some townships had two supervisors, whiles other had as many as six, they all, however, were one-year terms. During 1897, the State adopted the special legislations that changed the title of “Overseers” or “Trustees” of the township to Road Supervisors and created a minimum of three supervisory positions. The State also appropriated $1,000,000 to a road tax. Apparently, this act never went into affect, because in 1905, the act once again provided for three supervisors, abolished the work tax and repealed all inconsistent laws.

In 1909, the office of township Secretary and/or Treasurer were created. In 1913, the title of Road Supervisor was changed to Township Supervisor and provided for six-year terms. This act was the forerunner for the current township code. The act also provided for a uniform system of accounting for all townships, and required that certain forms and reports were provided by the Department of Highways to Townships, including minute books, account books, voucher forms and treasurer’s bond forms. Supervisors were permitted to work on the roads with their compensation being set by the Board of Auditors. Only non-working supervisors could receive meeting pay from ranging from $1.00 to $4.00.

In 1917, the legislature enacted the first township code. The scope of the supervisor’s authority was expanded to streetlights, fire hydrants, water towers, sewer, eminent domain, sidewalks and public buildings. The township code was rewritten and amended again in 1919.

By 1923, townships were maintaining 79,220 miles of local roads. Governor Pinchot signed legislation that took several thousand miles of local roads and put them under State control. This was known as the “Get the Farmer Out of the Mud Campaign”. During the 1930’s there was an effort to have the State take over all roads within the Commonwealth. This was violently opposed by the State Association, and of course, never happened. Ironically, starting in the 1980’s, townships are now reclaiming roads that they had originally given back to the State 60 years ago.

The next major update of the township code was in 1933. That version, as amended in 1947, and by individual acts of the legislature, is the current code in use today.

The Reformed Society of Cashtown, formed in 1875, helped construct the Rock Top Observatory in July 1879, for the owner, Editor Stahle. The observatory stood until the 1960’s. Remains of the building can still be found today close to the original site.

In 1913, Congress approved the construction of the “Lincoln Highway”, which is now part of Chambersburg Road and Old Route 30. The construction was completed in 1922. As late as 1914, there were several tollhouses along the Lincoln Highway. One was located in Cashtown, another at what is now the Kane farm near Tick Tock, and the last one was located somewhere near Mount Newman.

The Round Barn, which is still standing today, was constructed in 1914, by Noah Sheely. Sheely wanted to build something that was different. The barn, originally constructed to house farm animals, now serves as a fruit market.

The roles of Pennsylvania townships have undergone many changes since their creation, and are sure to undergo many more. To quote Mr. Philip Dewey (Tioga County), First President of the State Association of Township Supervisors, during his opening remarks at the first annual Convention in 1922. “Please remember that all virtue is not located within the bodies of the present generation, and all wisdom will not die when we go.”